“The fact that an opinion has been widely held is no evidence whatever that it is not entirely absurd; indeed in view of the silliness of the majority of mankind, a widespread belief is more likely to be foolish than sensible.”
― Bertrand Russell, Marriage and Morals

‘Whingeblade’ free on the Amazon Kindle for my Birthday!

Special promotion for my birthday! Free on the Amazon Kindle. ‘Whingeblade.’ The first volume of the irreverent fantasy series. ‘The Soo-nar Stories’
‘The characters each had a story of their own and came together, again and again to produce a wonderful fantasy to get lost in.’

Soo-nar is the last of the lion-eagles and Nowan, the prince who must save her. But he doesn’t really want to. He hates responsibility and his demonsword ‘Whingeblade’ would rather soak in hot oil than do any actual work. But, there is no-one else. This tale is about growing up, loyalty to friends and facing life’s challenges. Nothing new, but the true things about life do not change just because the times do. Every generation must pass on its tales to the next to try and ensure that the chain of good things is never completely broken.

‘Where There Be Tygers’ free on Amazon Kindle for 24 hours!

Where There Be Tygers’ is now free on the Amazon Kindle for the next few days! http://tinyurl.com/7mz6dso

‘- keeps amazing pace throughout the novel, always tense enough to keep you on the edge of your seat, but giving enough away to ensure you don’t become distinterested.

…for those enchanted by the history of the thylacine, or those still hopeful for its rediscovery, Ordinans’ Where There Be Tygers is an exciting read.’

‘The Celluloid Kid’ free on Amazon Kindle for the next few days!

A FREE  PROMOTION for a few days on the Amazon Kindle. Read my novel: THE CELLULOID KID. Get it now, or pay for it later 😦  http://goo.gl/QERWj 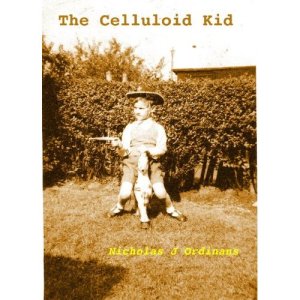 Trevor Newell is a hero, though the world around him in the English Midlands of the 1970s sees only a colourless teller behind the counter of the local bank. In the privacy of his own room in his mother’s house, Trevor lives in an escapist world of violent movies, but when fantasy meets reality and brutal robbers come to his bank, his character is tested as he finds himself drawn into a world of harsh realities. Will the Celluloid Kid grow up and does growing up always mean being physically and mentally tough or is there also room for compassion?

‘Home Run’ free on the Amazon Kindle for the next few days!

Doug Preston returns to his home on Victoria’s Mornington Peninsula late one night to find his wife, Anne, missing without explanation. When threats and violence follow, Doug hires an inquiry agent. The only clue is that Anne apparently returned to England with a mysterious man named John Moore. Despite the danger to his own life Doug follows the trail to England where with the help of old army and police friends he comes close to solving the mystery of Anne’s disappearance.
Or does he? How many more twists can there be before Doug finally discovers the truth about Anne?
A concise and fast-paced mystery. Told from Doug’s point of view it allows the reader to share his feelings as he tries to solve the mystery of his missing wife. The ending is shocking and surprising. –Scribes World

A unique tale of a man’s search to find the truth. The reader is taken in by the twists and turns of the plot, as Doug discovers one dead lead after another. Will appeal to all who love a story that dares to be different. –E-Book Reviews Weekly

Get it free now or pay for it later 🙂

Another 5 star review of ‘Where There Be Tygers’ on Amazon!

Thank you very Much!

I have been a professional endangered species for the last 23 years. I must say i very much enjoyed this story which is not only factually correct about this extinct animal, but is a great story as well. I couldn’t put it down and read it in one sitting. The characters are well developed and believable.

Whingeblade free on the Amazon Kindle for 48 hours!

FREE Amazon Kindle promotion for the next forty eight hours – download ‘Whingeblade – The Soo-nar Stories Volume One’ gratis! Or pay for it from June 6th!

‘Where There Be Tygers’ free on Amazon Kindle for 24 hours!

Review of ‘Where There Be Tygers’ on NSW Writing Centre Website

Today it features ‘Where There Be Tygers’ !

‘Whingeblade’ free on the Amazon Kindle for 24 hours!

FREE Amazon Kindle promotion for the next twenty-four hours – download ‘Whingeblade – The Soo-nar Stories Volume One’ gratis! Or pay for it tomorrow!